In praise of The Masked Singer 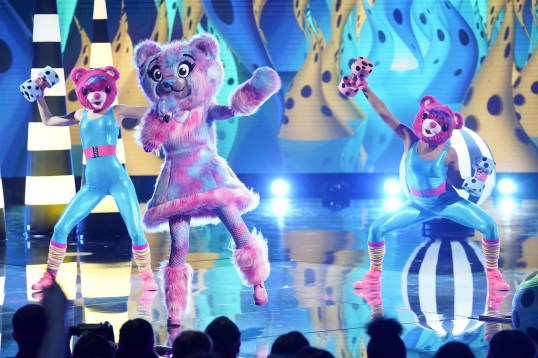 The Bear on The Masked Singer turned out to be a big surprise.

While we are all suffering to some degree from the coronavirus pandemic, some very seriously, we need to find ways to relieve our stress.

Since we are advised to stay home, it’s good to find things we can do without going out into the world. We can connect with people via the internet. We can break out Sweatin’ to the Oldies and exercise. We can bake some chocolate chip cookies. My co-worker Mindy crochets scores of adorable little hats for babies in the hospital.

We can also just sit back and watch some TV. There are plenty of movies on cable and Netflix to discover. But I have one guilty TV pleasure that helps me escape harsh reality — The Masked Singer.

I didn’t want to like this show initially and didn’t tune in at all during the first season. But I caught the last half of season 2 and when I heard The Fox singing, I instantly guessed it was Wayne Brady in that furry costume.

Having watched countless episodes of Whose Line Is It Anyway? over the years, Wayne’s voice is indelibly etched in my mind. Sure enough, The Fox was Wayne Brady and he was crowned the season’s champ. Well done!

Part of the fun of The Masked Singer is guessing who is under the costume. My track record isn’t very good (I don’t google for clues, I prefer to be surprised). But I did get Wayne Brady, Chaka Khan and Dionne Warwick just from hearing their voices.

In season 3’s first group of contestants, the White Tiger has no singing chops whatsoever. But he’s big and tall and has lots of fun energy. An audience favorite, he is moving on to the next round. This time, I paid attention to the clues, and it clicked. He’s got to be “Gronk,” Rob Gronkowski, former New England Patriots tight end. We shall see.

It’s especially fun on The Masked Singer when the judges are outwitted (Ken Jeong is a hoot). The judges, like me, did not not expect to see Drew Carey or Tony Hawk pop up under their costumes.

This week’s reveal was one of the oddest and most fun.

The first singer voted off in the third group was an innocuous looking pink and blue bear who rapped Baby Got Back. I had no clue who it was, but her choice to perform rap hinted she wasn’t a professional singer.

One of the judges was “oh so wrong,” but in an “oh so right” kind of way.  The judge guessed Bear was Tina Fey.

But lo and behold, it was Sarah Palin! Yep, the former governor of Alaska and Republican vice presidential candidate. Tina Fey, of course, has impersonated Palin a number of times on Saturday Night Live.

Did someone say surreal? For sur.

This was about the craziest thing I’ve seen on television — from the performance to the reveal.

If I wanted to quibble, and of course I do, I would ask The Masked Singer producers to be more fair to the older female singers. Chaka Khan and Dionne Warwick have great voices, but they were given lousy songs to sing, which, imho, is why they were booted off soon in the game. Give them material worthy of their talents.

Also, if  the Fox network is going to load in the Republicans, put some Democrats in there too. I would love to see Michelle Obama or Hillary or Bill Clinton hoot it up.

When all is said and done, for one hour on Wednesday nights, The Masked Singer relieves the heartache I’ve got from canceling my upcoming trip to Paris. And that, is a good thing.

Yes, Gronk, the whole world knows you are The White Tiger, and loves you for it. (Composite photo)