Archive for the tag “game of thrones” 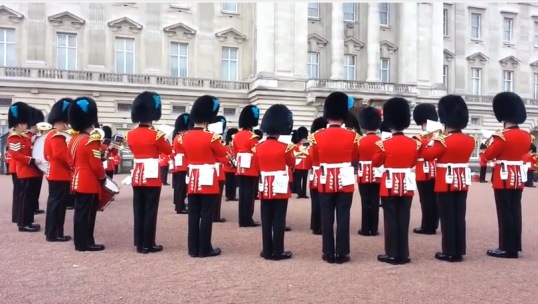 Visitors to Buckingham Palace got a special treat last week with an unexpected musical performance during the changing of the guard.
END_OF_DOCUMENT_TOKEN_TO_BE_REPLACED

Game of Thrones: Every dog and dragon has its day

The season finale of Game of Thrones, “The Children” had something in common with the film Pulp Fiction. Bad things happen when you’re on the throne, so to speak.
END_OF_DOCUMENT_TOKEN_TO_BE_REPLACED

Wouldn’t it be loverly if Hobbes the cat is a diamond in the rough?

Henry Higgins educated Eliza Doolittle, transforming her from a Cockney flower girl to a lady in My Fair Lady. Can I do the same with a cat?
END_OF_DOCUMENT_TOKEN_TO_BE_REPLACED

Dan Newbie playing the theme to Game of Thrones.

Dan Newbie is making beautiful music, using basic household items like wine glasses, pots, pans, even water bottles. So when you have a few moments, crank up the volume and enjoy!
END_OF_DOCUMENT_TOKEN_TO_BE_REPLACED

Joffrey at his royal wedding on Game of Thrones. So extravagant. I heard the dessert is to die for.

There are Platinum Weddings where expense is the king, and then there are Purple Weddings where the king is expended. How do you write about season 4, episode 2, of Game of Thrones without including a major spoiler? You can’t. So consider this fair warning.
END_OF_DOCUMENT_TOKEN_TO_BE_REPLACED

When Walder Frey licks his lips, watch out Catelyn.

“A sword needs a sheath and a wedding needs a bedding.”

Or is that “a wedding needs a beheading?”

I am so glad I have not read George R. R. Martin’s book series A Song of Fire and Ice, the basis for HBO’s Game of Thrones. If I had, I would have known what was going to happen in last night’s episode, The Rains of Castamere. As an “unsullied,” for me, the shock and horror that unfolded was totally unexpected, so it was TV at its best! END_OF_DOCUMENT_TOKEN_TO_BE_REPLACED

Game of Thrones: Noble Jaime and poor Theon rise to the occasion 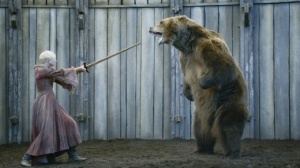 Brienne finds herself in a grizzly situation.

How far will a man go to repay a debt? That is the question put to the test in “The Bear and the Maiden Fair,” this week’s aptly titled episode of Game of Thrones.

The now-penitent Jaime proves he will go quite far to repay Brienne for the debt he owes her. Their opening scene was a painful and courageous goodbye. While Jaime gets to leave captivity, Brienne must stay, and both know it will be the end for her. The now-noble Jaime tells her he will make sure the Stark girls are returned to their mother. A promise so sincerely spoken, you know he will keep it. Brienne keeps a stiff upper lip as she says goodbye and readies herself to face her fate alone. END_OF_DOCUMENT_TOKEN_TO_BE_REPLACED

Posted in TV and tagged bear, bear and the maiden fair, brienne of tarth, game of thrones, jaime lannister, theon | Leave a comment

Game of Thrones: Check and Mate 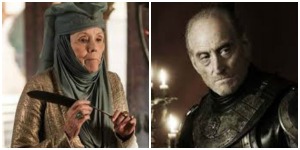 The Queen and King make their moves.

There was a lot to like in this week’s episode of Game of Thrones titled “The Climb.” Especially the game of human chess and one-upmanship played with delight by Lady Olenna (The Queen of Thorns), and Tywin Lannister.

What fun veteran actors Diana Rigg and Charles Dance had with a round of “Your family is more depraved than mine!” END_OF_DOCUMENT_TOKEN_TO_BE_REPLACED

Game of Thrones: Separated at Birth?

Remember Spy magazine? It was a great journalistic read that folded way too soon in 1998.

The other day I was thumbing through my old collection of Spys (a wistfully short stack) and came across a fascinating “lost” issue featuring the magazine’s famous “Separated at Birth?” column.

And what do you know? I uncovered clear proof that Spy was way ahead of the curve when it came to  investigative and historic reporting.

As shown below, Spy astonishingly connected the genealogy of a trio of brilliant TV icons with their Game of Thrones ancestral twins. Kudos to you, Nostradamus Spy.

Game of Thrones: A big hand for the little lady

Brienne and Jaime in happier days.

My new favorite TV couple is Jaime and Brienne. Like Oscar and Felix, they are an indeed an odd couple. But a rather fascinating odd couple.

In this week’s episode of Game of Thrones, aptly titled The Walk of Punishment, Jaime Lannister (Nikolaj Coster-Waldau), reveals his soft spot for his warrior captress Brienne of Tarth (Gwendoline Christie).

Since the get-go, there’s been a whisper of sexual tension between the two, though Brienne, chaste, loyal, and strong, is as far removed from Jaime’s scheming sister/lover as one could get. Perhaps that’s the attraction?

Up until their capture by the Bolton gang, the two had merely traded barbs and crossed swords while Jaime half-heartedly kept trying to escape. A laughtrack for their scenes wouldn’t have been out of line.

But Jaime’s fatal flaw is hubris. And this time it cut him to the quick. END_OF_DOCUMENT_TOKEN_TO_BE_REPLACED