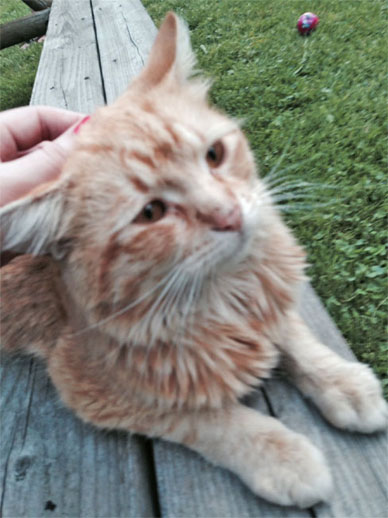 Wouldn’t it be loverly if Hobbes the cat is a diamond in the rough?

Henry Higgins educated Eliza Doolittle, transforming her from a Cockney flower girl to a lady in My Fair Lady. Can I do the same with a cat?

That’s the challenge I am facing with a cute little guy named Hobbes, the subject of The Hobbes Experiment.

Last week, my son Kevin called me while I was on a trip to Boston, all excited about a stray orange cat he came across. It had been roaming the streets of Bridgeport, Connecticut and was trying to get into apartment buildings. People felt sorry for him and were feeding him outside. My son instantly liked him and started calling him Hobbes from Calvin & Hobbes. 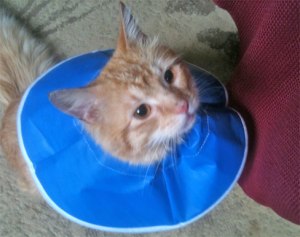 Hobbes in his Elizabethan collar.

For years, our family had wanted an orange cat. My daughter Katie even picked out a name for it — Dexter (long before the series ran). But we never found one and the search eluded us. We have a very happy black Tuxedo cat and Dilute Calico though.

With the kids grown and off on their own, Kevin has a black cat, Poe, and Katie can’t have pets in her Boston apartment.

“You want a cat? It’s the orange cat you always wanted. He’s really cute and so gentle,” Kevin said.

“Why don’t you take him,” I responded. 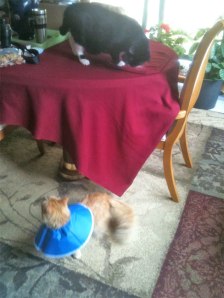 But Kevin’s apartment is small for even one cat and he didn’t think it would be fair to have another one there.

I was ready to pass on Hobbes, but then Kevin said the magic words.

“You can tell he was an inside cat. He’s good with people and always tries to sneak inside. I think he probably belonged to some college kids who just let him loose.”

The notion of an indoor cat forced outside to fend for itself, tugged at my heart. I can’t think of anything more cruel than throwing a domesticated pet out into the wild. I told Kevin I would consider taking him if he brought the cat to the vet and he didn’t have any diseases like feline leukemia, worms, or distemper. Hobbes passed with flying colors.

So on our way home from Boston, we met him. A small cat, with a big fluffy orange tail and sweet little face. Morris the cat’s little brother. He was unneutered, which we could tell by sight and smell. He sprayed a bit when scared. If you have ever smelled a male cat’s testosterone body fluid, you know there is nothing so unbearably and toxically vile.

I decided to take a chance on Hobbes, brought him home, and made an immediate appointment with our vet to have his pillar and stones removed (ala Game of Thrones).

Hobbes had other issues. His fur was badly matted in spots. While roaming the streets and searching for food, he probably didn’t think much about grooming. He would let us pet him, but growled and hissed when we tried to pick him up. A very brief, and what I hoped would be gentle, introduction to our other cats did not go well either. The fur was flying. And there was more spraying.

I started to seriously wonder if this “experiment” would work. Was Hobbes too far gone, was he too feral to rehabilitate? My son’s vet estimated Hobbes’ age at about one-year old. So, I figured he was so young, he should be easy to work with. But when my vet examined him, he said Hobbes was at least three-years old. That made more sense. He looked like he had been on the streets for some time, like Grizabella in Cats.

So Hobbes is now recovering peacefully from his operation. He is in Kevin’s old bedroom where he can rest and look out the window at chirping birds. The vet put an Elizabethan collar on him to keep him from licking his ex-parts, but Hobbes continually tears it off.

To keep him from spraying, I bought some pheromone spray which is supposed to calm him down. He still won’t let us pick him up. I bought a Furminator brush (which is VERY gentle) to clean up his fur, but he hisses when it comes near him. I’ve put off introducing him to the other cats again until I think all parties can handle it. I speak to him in soothing tones and tell him everything’s all right.

I honestly don’t know if The Hobbes Experiment will be successful, we may be the wrong household for him. But I am going to do my best to help give this guy a long and happy life. Wouldn’t that be loverly.

P.S. Cat owners – Your advice is more than welcome.

2 thoughts on “The Hobbes Experiment”