Bryan Cranston, as Lyndon Johnson, has a lot to be happy about, getting a Tony nomination for his first Broadway show.

Tony, Tony, Tony. There is something maddening about the Tony award nominations for Broadway shows. Each year there seems to be a “HUH, NO WAY!” moment for me.

Last year, my HUH moment was with the acting nominations for my favorite play of the season, Who’s Afraid of Virginia Woolf? A four-member cast, three members were nominated for acting awards — Tracy Letts, Amy Morton and Carrie Coon. One cast member, Madison Dirks, was left out. This made no sense to me, and I still firmly believe Mr. Dirks was robbed, slighted beyond belief. The entire cast was nothing short of brilliant, including Mr. Dirks. The play went on to win a Tony for Best Revival, and Mr. Letts won for a fresh out-of-the-box performance. In his acceptance speech,  he called Mr. Dirks’ performance “criminally unsung.”  A class act. AND TRUE. 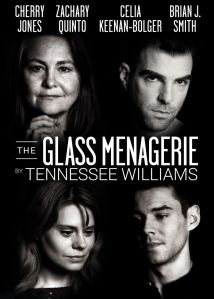 So, this morning the latest Tony nominations were announced, and lo and behold. Once again, the same thing has happened with my favorite play of the season! This time it’s The Glass Menagerie. With just a four-member cast, three of them were nominated for acting awards — Cherry Jones, Celia Keenan-Bolger, and Brian J. Smith. Zachary Quinto was left out. OUCH!!!

The nominees for Best Leading Actor in a Play are: Samuel Barnett, Twelfth Night, Bryan Cranston, All the Way, Chris O’Dowd, Of Mice and Men, Mark Rylance, Richard III, and Tony Shalhoub, Act One. Mark Rylance doesn’t belong there (he’s also nominated for a Tony for Featured Actor for Twelfth Night, where he does belong). Zachary Quinto belongs on this list instead. There, I’ve said it. It’s déjà vu all over again. Sigh.

Mr. Quinto has legions of fans for his roles in Star Trek and American Horror Story, but he wasn’t the only well-known actor not on Tony’s A list. Others who appeared on the Great White Way this past season, but were left out of the nominations are:

Taking a breath, there was some positive news. Bryan Cranston was nominated for a Tony for his performance as President Johnson in All the Way!  A well-deserved nomination, and I predict he will win. Not that the other nominated actors aren’t good, just that Bryan Cranston was GREAT. As I said in my previous post, a tour de force. That is something amazingly special. And award worthy. We’ll see what happens on June 8.

One thought on “Tony nominations: Déjà vu all over again”