Breaking Bad: To heck with To’hajiilee 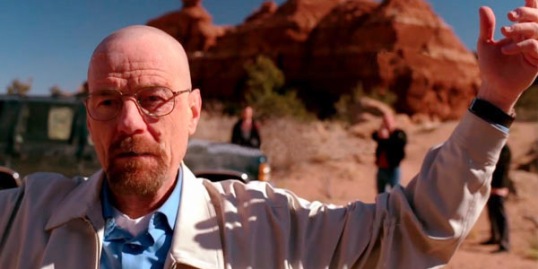 Walt surrenders at last. But it’s not the end of things.

On Breaking Bad, whenever Todd recruits his Uncle Jack, watch out, something bad is bound to happen. And it did last night night in To’hajiilee.

This episode was filled with Hitchcockian-like tension culminating in a violent, Sam Peckinpah-like shootout. Except we don’t know yet, who, if anyone, was killed. To’hajiilee refers to the reservation where the climactic shootout took place, and we learn, it’s the same site where Walt and Jesse did their first cook. How nostalgic.

Kudos to Vince Gilligan for not treating police like stupid idiots. It’s refreshing not to see Hollywood stereotypes.

Hank has a jerky personality, but as a cop, he’s excellent. In this episode he outwits Walt in the most delectable ways. First, he scares Huell into thinking Walt is after him, with a gross, touched up photo of Jesse. Huell provides details about Walt’s money which leads to another stroke of brilliance. Again, using doctored pix, Hank has Jesse call Walt and tell him he tracked down his money and is burning it.

In a hysterically tense scene, Walt speeds to the hiding spot, confessing the whole time to crimes in an effort to explain to Jesse why he had to do them. Yes, he poisoned Brock, but Jesse should know he would only give Brock just enough Lily of the Valley to make him sick, and not kill him. Ha!

Saul shows Walt Jesse’s handiwork to his face at the carwash.

Hank’s plan works beautifully and I was sitting on the edge of my seat with anticipation when Walt arrived at To’hajiilee and realized Jesse played him. As he sees a vehicle approach, he figures it is Jesse and perhaps his pals, so he calls Uncle Jack to come in and help. But, as usual on Breaking Bad, things go awry. Jesse is with Hank and Gomey, so forced into a corner, Walt surrenders. When Uncle Jack arrives, Walt tries to call him off, but the gang will have none of it and start shooting. And that’s where the episode ends. In mid scene. We don’t know if Hank, Jesse or Gomey survive. It’s such an intense cliffhanger that fans are going to dread waiting another seven days to find out what happens next.

A little tip of the hat in this scene to one of my favorite films, The Treasure of the Sierra Madre. When Hank and Gomez tell Uncle Jack and gang they are with the DEA, Jack asks for proof, “show us your badges,” he yells repeatedly. This reminded me of the classic film, where bandits try to tell Humphrey Bogart’s character they are police. When Bogie asks to see their badges, one bandit cries out, “Badges? We don’t need no stinkin’ badges.” Then all hell breaks loose as it did in To’hajiilee.

Favorite line of the night:

Saul, beaten to a pulp by Jesse, goes to the carwash to tell Walt about Huell and meets Walt, Jr. at the counter. Junior is starstruck to meet someone he recognizes from TV. “Don’t drink and drive, but if you do, call me,” Saul tells him.

Speaking of Walt, Jr., he’s  probably the only innocent person left on the show. It will be interesting to see if he learns the truth about the father he idolizes, and how he reacts to it.

Jesse Plemons as Todd has become a downright scary villain. He looks All-American and rather bland, but he’s pure evil and a bit creepily fixated on Lydia. He reminds me of Giancarlo Esposito who played Gus as a rather quiet character, hiding his evil side in plain sight. Breaking Bad has a nice balance of bombastic loud bad guys such as Tuco, Krazy 8, and Don Eladio, and quiet ones like Gus, Todd, the cousins, and the silent but deadly Hector Salamanca.

Next week’s episode is titled Ozymandias, based on the poem by Percy Bysshe Shelley. The poem is about a shattered, ruined statue in the desert wasteland, with its arrogant, passionate face and monomaniacal inscription – “Look on my works, ye mighty, and despair!”  Hmmm… wonder what this episode will be about?

I met a traveller from an antique land
Who said: “Two vast and trunkless legs of stone
Stand in the desert. Near them on the sand,
Half sunk, a shattered visage lies, whose frown
And wrinkled lip and sneer of cold command
Tell that its sculptor well those passions read
Which yet survive, stamped on these lifeless things,
The hand that mocked them and the heart that fed.
And on the pedestal these words appear:
`My name is Ozymandias, King of Kings:
Look on my works, ye mighty, and despair!’
Nothing beside remains. Round the decay
Of that colossal wreck, boundless and bare,
The lone and level sands stretch far away”.