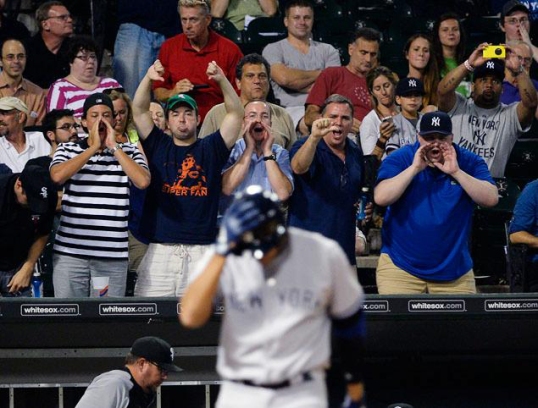 “A-Rod is playing third, batting fourth, and pleading the fifth.”

Alex Rodriguez is back and the New York Yankees are stuck with him. Yankees fans had hoped A-Rod would receive a lifetime ban from baseball when he was implicated in the Biogenesis doping scandal. A ban would save the struggling team millions of dollars it could spend elsewhere on players it badly needs.

Instead, MLB handed A-Rod a 211 game suspension, which he is appealing. The appeal won’t be acted upon until November, which means A-Rod will get to play the rest of this season until the case is decided.

Since returning to the playing field this past Monday following extended time off from an injury, A-Rod has endured jeers and catcalls from baseball fans, including diehard Yanks fans who would like to see him just go away.

At 38, A-Rod is no longer on his A game, and his play and power have greatly diminished. But he has work he still needs to to do. He’s chasing a home run record and he wants to go out with glory. And, oh yeah, there’s the money.

In 2007, the Yankees signed A-Rod to a 10-year, $275 million contract. The richest contract in baseball history. They knew then A-Rod wouldn’t be worth the money in the later years of the contract, but they were greedy and he was greedy. So it was a perfect match.

Time will tell if this major league scandal and embarrassment will send a message to baseball owners to think twice about signing players to ridiculous huge money, long-term contracts. Time will also tell if the next generation of baseball players gets the message not to dope and cheat.

A-Rod hasn’t said anything publicly or to his teammates about his suspension and the Biogenesis claims. Has he gotten the message?

David Roth of SB Nation said, “It’s easy to see how Rodriguez might have come to believe that he is unlimited and ungovernable and outside and above regular rules. His whole life has been triumphant proof of it. This is not an excuse, but is maybe the beginning of an explanation.”

A-Rod has lived his career with lies. In 2009, after previously denying use of performance enhancing drugs, (including a 2007 interview on 60 Minutes) Rodriguez finally admitted publicly to using steroids. He said he used them from 2001 to 2003 when playing for the Texas Rangers due to “an enormous amount of pressure” to perform, claiming he was “young and foolish” at the time.

So having played the “I was just young and stupid card” what can he say now at 38?

I think Roth is correct. It’s the Leona Helmsley thing — A-Rod thinks he’s above it all. Rules are for the little people. Cheating has gotten him millions of dollars and he loves living the lifestyle of a high roller. He isn’t going to give it up without a fight.

Pete Rose, who was banned from baseball in 1989 for gambling, had harsh words about A-Rod this week.

“We have to get these people to understand that if you make mistakes, people will forgive you if you come forward,” Rose told USA TODAY Sports. “Don’t do like I did. Don’t do like (Ryan) Braun did. Don’t do like A-Rod did. I wish I had come forward a long time ago. Some guys came forward, like (Jason) Giambi, like (Andy) Pettitte. And they went on with their lives. They’re playing and they’re making good money, and there’s no shadow upon them right now.”

Arrogance is part of the package when it comes to superstar sports cheaters. For years Rose was arrogant and refused to acknowledge his gambling problem. He finally came clean in 1994 only when he was ready to publicize a new book. He appears to have learned his lesson now.

In another high profile sports cheating case, it took years of investigations and heavy proof before cyclist Lance Armstrong would admit to illegal drug use.

The once American hero who survived cancer and won seven Tour de France races, was banned last year from professional cycling and stripped of his titles. A report from the United States Anti-Doping Agency concluded that Armstrong engaged in “the most sophisticated, professionalized and successful doping program that sport has ever seen.”

For much of his career, Armstrong was dogged by rumors he had been doping. He shot back hard at his critics, calling them jealous liars, and even filed lawsuits against them, intent on destroying their lives and careers. It turns out the critics were right all along and Armstrong was the liar. A mea culpa Armstrong did on an Oprah Winfrey show fell flat and Armstrong is living quietly (for now anyway) in disgrace.

So what’s the next move for A-Rod? He has cheated the Yankees organization, cheated fellow players out of stats and records they likely should be holding, and has cheated fans who believed he was a superstar.

Most importantly, A-Rod has cheated Alex Rodriguez. He doesn’t know it yet, but he will.