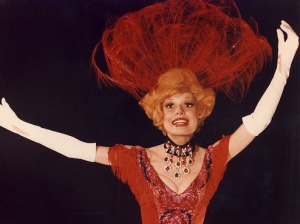 Thank you! A petition on change.org that I’ve been talking about for the past week has now received more than a thousand signatures so it will be forwarded to the Kennedy Center for consideration.

The petition supports Carol Channing for a Kennedy Center honor for her lifetime achievement in the performing arts. Carol has been entertaining audiences since the 1940s. Her most iconic roles were Lorelei Lee in Gentlemen Prefer Blondes and Dolly Levi in Hello, Dolly! She also created a foundation with her husband Harry supporting arts education programs in public schools.

For a kid like me she meant so much. I would listen to my mom’s Hello, Dolly! album over and over and over. My favorite song was So, Long Dearie. I used to pretend I was singing it to all the mean bullies out there.

Here is a clip below of Carol singing the song, not sure where. But she brings her own inimitable style to it, and that’s what I love about her, her rugged individualism as George Costanza would say. Now it’s up to the Kennedy Center. We’ll find out their decision in September. Fingers crossed for Carol.

And on those cold winter nights, Horace…
You can snuggle up to your cash register.
It’s a bit lumpy but it rings!

Don’t come a knockin’
I’ll be all dolled up
And singin’ that song
That says you dog, I told you so
So Horace, you will find your life a sad old story
When you see your Dolly shuffle off to glory
Oh I should have said so long…
So Long ago!