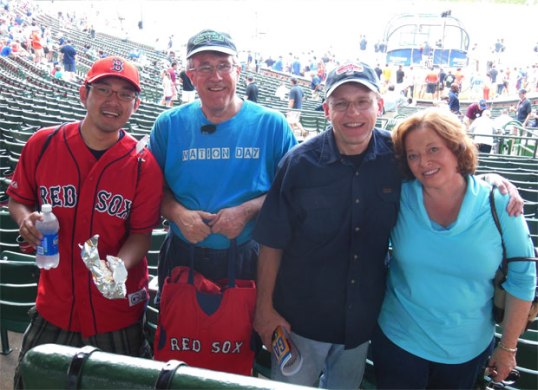 Friends Tatsu (left), and Len and Mary (right), join my husband in Chicago to watch the Red Sox play the Cubs.

Every year I say I’m not going to watch so much baseball, I have better things to do, and every year I break that promise. As a kid and young adult I played softball, but except for a company game here and there, my playing days are over. But I still love the game. My team of choice is the Boston Red Sox, but I’ll happily watch and cheer other teams too.

And what about the New York Yankees, our bitter foes? The way I see it, we all need a worthy contender and rival to motivate us to do our best and keep us on our toes. The Red Sox and Yankees are true rivals. Their games are arduous and long, with each team working hard to tire out the other pitcher and hit that long ball. Without the Yankees, the baseball season wouldn’t be nearly as exciting. So I celebrate the rivalry.

Here are a few selected baseball poems written from different points of view and perspectives. Also, here is a link to perhaps the most beloved baseball poem of all time, Casey at the Bat by Ernest Lawrence Thayer. Batter up!

His art is eccentricity, his aim
How not to hit the mark he seems to aim at,

His passion how to avoid the obvious,
His technique how to vary the avoidance.

The others throw to be comprehended. He
Throws to be a moment misunderstood.

Yet not too much. Not errant, arrant, wild,
But every seeming aberration willed.

Not to, yet still, still to communicate
Making the batter understand too late.

It looks easy from a distance,
easy and lazy, even,
until you stand up to the plate
and see the fastball sailing inside,
an inch from your chin,
or circle in the outfield
straining to get a bead
on a small black dot
a city block or more high,
a dark star that could fall
on your head like a leaden meteor.

The grass, the dirt, the deadly hops
between your feet and overeager glove:
football can be learned,
and basketball finessed, but
there is no hiding from baseball
the fact that some are chosen
and some are not—those whose mitts
feel too left-handed,
who are scared at third base
of the pulled line drive,
and at first base are scared
of the shortstop’s wild throw
that stretches you out like a gutted deer.

There is nowhere to hide when the ball’s
spotlight swivels your way,
and the chatter around you falls still,
and the mothers on the sidelines,
your own among them, hold their breaths,
and you whiff on a terrible pitch
or in the infield achieve
something with the ball so
ridiculous you blush for years.
It’s easy to do. Baseball was
invented in America, where beneath
the good cheer and sly jazz the chance
of failure is everybody’s right,
beginning with baseball.

(December 26, 1974 Title IX of the 1972 Education Act is signed, providing for equal opportunity in athletics for girls as well as boys.)

The year was 1974
When Little Leaguers learned the score.
President Ford took out his pen,
And signed a law that said from then
On women too would have the chance
To wear the stripes and wear the pants.
Now what you hear, as flags unfurl,
Is “Atta boy!” and “Atta girl!”

The game of baseball is not a metaphor
and I know it’s not really life.
The chalky green diamond, the lovely
dusty brown lanes I see from airplanes
multiplying around the cities
are only neat playing fields.
Their structure is not the frame
of history carved out of forest,
that is not what I see on my ascent.

And down in the stadium,
the veteran catcher guiding the young
pitcher through the innings, the line
of concentration between them,
that delicate filament is not
like the way you are helping me,
only it reminds me when I strain
for analogies, the way a rookie strains
for perfection, and the veteran,
in his wisdom, seems to promise it,
it glows from his upheld glove,

and the man in front of me
in the grandstand, drinking banana
daiquiris from a thermos,
continuing through a whole dinner
to the aromatic cigar even as our team
is shut out, nearly hitless, he is
not like the farmer that Auden speaks
of in Breughel’s Icarus,
or the four inevitable woman-hating
drunkards, yelling, hugging
each other and moving up and down
continuously for more beer

and the young wife trying to understand
what a full count could be
to please her husband happy in
his old dreams, or the little boy
in the Yankees cap already nodding
off to sleep against his father,
program and popcorn memories
sliding into the future,
and the old woman from Lincoln, Maine,
screaming at the Yankee slugger
with wounded knees to break his leg

this is not a microcosm,
not even a slice of life
and the terrible slumps,
when the greatest hitter mysteriously
goes hitless for weeks, or
the pitcher’s stuff is all junk
who threw like a magician all last month,
or the days when our guys look
like Sennett cops, slipping, bumping
each other, then suddenly, the play
that wasn’t humanly possible, the Kid
we know isn’t ready for the big leagues,
leaps into the air to catch a ball
that should have gone downtown,
and coming off the field is hugged
and bottom-slapped by the sudden
sorcerers, the winning team

the question of what makes a man
slump when his form, his eye,
his power aren’t to blame, this isn’t
like the bad luck that hounds us,
and his frustration in the games
not like our deep rage
for disappointing ourselves

the ball park is an artifact,
manicured, safe, “scene in an Easter egg,”
and the order of the ball game,
the firm structure with the mystery
of accidents always contained,
not the wild field we wander in,
where I’m trying to recite the rules,
to repeat the statistics of the game,
and the wind keeps carrying my words away