What a game last night at Fenway Park. With a final score of 17 to 5, obviously a lot happened. The Red Sox scored in seven straight innings against the Rangers, and after racking up six runs in the second, for all intents and purposes the game was over. But I’ll leave the game recap to the pros. 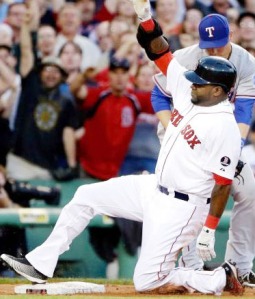 The thrill of the game for me was watching David Ortiz come alive for the first time in like FOREVER. Did he have a swig of Ponce de Leon’s fountain of youth? In that big second inning, he hit a TRIPLE!

A TRIPLE! This is the guy with mega foot problems who usually looks like he’s out of breath just walking up to bat.

TRIPLE!  This is the guy, who at 37, hasn’t had a triple in two years, and who many fans thought was washed up and should have retired.

A TRIPLE! This is the guy who when he hits a fly ball, tosses his bat, stands at home plate in dumbstruck awe, listening in his mind to strains of “How Great Thou Art,” basking in his body’s golden glow, before hobbling off to first if it’s a homer. Or hobbling back to the dugout without running, if the ball is caught (most of the time).

A TRIPLE! Yeah, THIS guy, hit a freakin’ triple. And when the next batter, Mike Napoli, hit a fly ball, Papi tagged up from third and scored.

Big Papi is back! 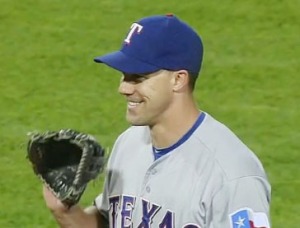 As manager John Farrell said, Papi will never be a base stealer (although he has tried in the past, embarrassingly unsuccessfully). But he has game! And I’m loving every minute of Papi’s resurgence.

The other really fun thing from last night’s game was the pitching effort in the bottom of the eighth by Texas outfielder David Murphy. The Rangers knew they were toast so in order to save their bullpen sent the left fielder in to clean things up. And he did! He didn’t give up any runs. It was the ONLY inning the Sox didn’t score. Red Sox batter Mike Carp was so agitated when he struck out against Murphy on a 67 mph pitch, that he started arguing with the umpire and got tossed.

Interesting fact from ESPN: David Murphy was the first position player for the Rangers to pitch at Fenway Park since José Canseco pitched 1 inning, allowing 2 hits, 3 R, 3 ER, 3 BB, 0 SO on May 29, 1993. Boston won 15-1. Murphy did much better!