When Walder Frey licks his lips, watch out Catelyn.

“A sword needs a sheath and a wedding needs a bedding.”

Or is that “a wedding needs a beheading?”

I am so glad I have not read George R. R. Martin’s book series A Song of Fire and Ice, the basis for HBO’s Game of Thrones. If I had, I would have known what was going to happen in last night’s episode, The Rains of Castamere. As an “unsullied,” for me, the shock and horror that unfolded was totally unexpected, so it was TV at its best!

The penultimate episode of the season proved to be a huge game changer.

The pouty Edmure, who continually looks like he needs a healthy dose of prune juice, was ready to fulfill his obligation to marry one of Walder Frey’s daughters.

So Catelyn Stark, son Robb (aka The Man Who Would Be King), his pregnant wife Talisa, and their entourage arrived at The Twins and were greeted with great nonchalance by Walder Frey (played with delicious abandon by David Bradley). Frey quietly accepted Robb’s apologies for breaking his promise to marry one of his daughters, while leering at Talisa.

But on with the wedding! Who is Frey going to pick to be Edmure’s mate? Like a pimp showing off his escorts, he trots out his daughters and granddaughters and puts them in a police line up. He can’t even remember all their names. 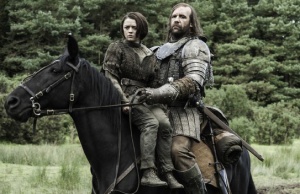 Arya and the Hound crash the wrong wedding.

In seemingly good spirits, Frey announces, “The wine will flow red, the music will play loud, and we’ll put all this mess behind us.” Ah yes, it was indeed a red wedding and the music was loud. As Meat Loaf would say, two out of three ain’t bad.

Edmure is thrilled when his bride comes down the aisle and it’s the lovely Roslin. Wow, who knew he could smile. The two happily share a platter of blackberries at the reception, when Frey announces it’s time for the couple to consummate their marriage. “A sword needs a sheath and a wedding needs a bedding,” he says as the bride and groom are whisked away.

Talisa tells Robb she wants to name their unborn baby Eddard after his father Ned Stark. Which reminds us. How did Ned Stark die? Oh, yeah, he was shockingly beheaded in front of his two daughters. Ay yi yi.

Then, in a scene that looks like it was plucked from The Godfather, the reception door is locked, the band stops playing, and Catelyn sees that Bolton is wearing chainmail on his wrist. This can’t be good.

For Frey, revenge is a dish best served red.

He did not forgive Robb for breaking his promise and the blood wedding and blood letting begins. Talisa is brutally stabbed, Robb is wounded, and Catelyn frantically holds a knife to the neck of Frey’s young wife, pleading for Robb to be spared in exchange for her life. But Frey looks askance at the desperate Catelyn and simply mutters, “I’ll find another,” sealing Robb’s fate. Catelyn slits the throat of Frey’s wife and the same is done to her. All of Robb Stark’s entourage is slaughtered, including the most horrible murder of all — to Robb’s wolf, Grey Wind. NO! I hate when the wolves die!

So what could be worse?

How about if a young, innocent child were to witness this scene?

Yes, that would be much worse. So enter poor Arya, our plucky little tomboy heroine. She had just arrived at The Twins with The Hound, with the hopes of reuniting with her family, when she heard and saw much of the bloody mess.

The Hound, a despicable scoundrel, who will kill an innocent child at the drop of a hat, mercifully knocked Arya out and carried her off so she wouldn’t have to see any more bloody carnage. The rat we love to hate did something good, in his own special way.

The episode closed with silence. Stone silence. No music. Just the credits. Shocked faces, “sullied” and “unsullied” alike, were left just sitting there with our mouths agape. Wondering, what the heck is in store for us in the season finale next week.