A Bridge Too Far

My name is Patricia and I am a Gephyrophobiac.

There, I’ve said it.

Pronounced JEFF-Hi-Row-Foobee-Ak, a Gephyrophobiac is not someone who fears Geoffrey Chaucer, though trying to read The Canterbury Tales in 14th century Middle English is pretty scary.

A Gephyrophobiac is someone who has an abnormal fear of crossing bridges. And that would be me.

Just writing this blog and thinking about driving across a double-decked suspension bridge like the Verrazano-Narrows, is making my heart race. My mind is racing too. I think I might just press control, alt, and delete, and instead write about something much nicer, like the clever Japanese artist who makes Latté Kitties.

No. They say the first step to overcoming your fear is to admit it, so I need to face this head on. While those Latté Kitties are really cool, that’s another post for another day.

I don’t remember the very first time I clenched with fear while driving across a bridge, but I do know it’s something that still scares me half to death.

Picture this. As you drive towards a bridge, your pulse quickens. You start to panic. Can you stop, turn around, or ditch out at a final exit? Your head throbs, you feel dizzy. Your breath starts to tighten and you start puffing. “Oh no, oh no.” You know, you just KNOW that as you drive onto that bridge you are going to VEER to the right, crash THROUGH the guardrails, and lunge HEADFIRST into cold, icy water. You’ll scream as the car crashes into the waves. You’ll try and try to push the door open but it won’t budge. You’ll keep screaming but no one will hear you. You’re trapped. Dirty, cold water rises and fills your mouth, your nose, your eyes, and then it’s over your head. You’re freezing. You hold your breath and cry as your lungs fill with water. You’re suffocating, and then… you’re just gone.

I can’t say that everyone has those thoughts as they approach the George Washington Bridge, but I do. Oddly, I am not particularly afraid of heights, and when I’m in New York one of my favorite things to do is walk across the Brooklyn Bridge. It’s fun, has great views, and a big plus for me — it’s free. But when I have to drive across the Brooklyn Bridge, it’s no fun at all.

Another New York nightmare is the Verrazano-Narrows Bridge. From tower to tower it’s 13,700 feet of pure hell. When you’re driving through Manhattan and going to Staten Island, the Verrazano, unfortunately, is technically your best option. A couple years ago, I wanted to visit my friend Paul who lives on SI. I also wanted to avoid the Verrazano, so I researched my options. The Staten Island Ferry (another NYC freebie) will get you there, but it doesn’t take cars, Paul doesn’t live near it, and because of health issues he can’t drive. I could avoid NYC altogether and go through New Jersey. It would take me a couple more hours plus there’s still a bridge to cross. What the heck, that just means I’d have to leave around 4 a.m. to get there in time for breakfast at 9, so the Jersey route was my plan. But Paul advised otherwise. He said he lived right near the Verrazano and it made no sense to come any other way. So, I took the Verrazano. See two paragraphs above. 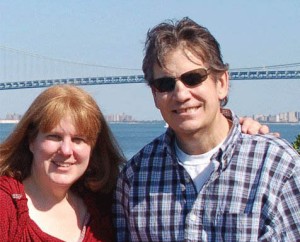 Paul and me on Staten Island, where you can see the “Very Narrow Bridge” from everywhere.

The worst NYC bridge though is the Tappan Zee which I cross every year on a pilgrimage to Jersey to enjoy Easter dinner with my husband’s cousins. The Tappan Zee is the longest bridge in the State of New York. But it’s not just its length, 16,013 feet from tip to tip, that makes this a nasty mother. Like the Verrazano, look to your left – water, look to your right – water, look DOWN – water! The more vivid the view, the greater the discomfort. At one point on the Tappan Zee you can snag a quick glimpse of lower Manhattan, but it’s so not worth it.

Fortunately, my husband does the driving on Easter, so a mile or two before the approach, I make sure there is lively and festive music playing, such as the soothing tones of lyric baritone Miles Phillips singing If I Were A Rich Man, on my Fiddler on the Roof CD. Then I close my eyes and say the same thing I’ve said for the past 20 years. “Drive in the center lane. Please. I mean really, please. The center lane, okay?” And he does.

A train plunged into the Piscataqua River in 1939 “as if thrown from a catapult,” according to news reports. Wind shear I wonder???

The Tappan Zee is such a monster that the New York Thruway Authority will actually help Gephyrophobes cross it. A driver can call the authority in advance and arrange for someone to drive the car over the bridge for them. R.E.S.P.E.C.T. for the Thruway Authority!

Another nasty little bridge is the Piscataqua River Bridge, which connects New Hampshire to Maine on Interstate 95. The Piscataqua is classified as a “cantilevered through arch bridge,” which I believe is techno speak for “windy bridge of doom.” I had to drive across it for a year while attending the University of Maine at Farmington. (I transferred the following year to Boston University where you can find the Zakim “Shake’ em” Bridge.) The wind shear on the Piscataqua was horrible and would forcibly push my poor little Toyota Corona into the next lane. 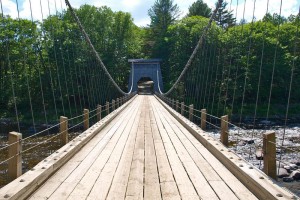 The Wire Bridge in Maine, original cables and all.

Speaking of Maine, one of my least favorite bridges is the Wire Bridge in New Portland, near New Vineyard, where my grandparents used to live. Built in 1866, the Wire Suspension Bridge spans the Carrabassett River and is considered a “unique structure” because it is the only survivor of four such bridges built in Maine in the 1800’s. It’s probably the only bridge of its type still standing in the U.S., according to reports.

It’s not very high, so at first the Wire Bridge doesn’t seem too scary. People call it “cute” and “quaint.” As you approach, you first notice the cedar shingles on the tower. Then you notice the hairy strands of the main support cables. These are the ORIGINAL support cables from two centuries ago. As you drive across the bridge it shakes. YES IT SHAKES. Some people don’t think it shakes very much. BUT IT SHAKES. A little is MORE than enough!

If you think the Wire Bridge is no big deal or anything to get worked up about, just tell that to the family of Roland Philbrick, the driver of a 1940 Chevrolet pulp truck, and his son, Huck,who crashed off the Wire Bridge in 1942. Amazingly, they were unharmed!

I better stop this blog post now, or it will turn into a novella. Suffice it to say, I have learned to live with my fear. It doesn’t prevent me from traveling, as it does for some of my fellow Gephyrophobiacs. I deal with it, I don’t like it, but I deal with it. Life goes on.

Things that help me drive over a bridge: Lively music such as the Stage Stars studio cast recording of Fiddler on the Roof; repeating nonsensical words or a mantra such as “Shut The F Up;” sticking my head out the window in bracing wind; thinking about Latté Kitties.

6 thoughts on “A Bridge Too Far”